A community response to loneliness during Covid. Part 3: Musical Mews

As we saw the last ‘normal’ weekend before lockdown kicked in.  A few neighbours invited folk in their 2 street cul-de-sac, to join a WhatsApp group ahead of Covid's impact.  A flurry of 20 or so joined that day, by the end of the week it doubled and there are now 64 members. 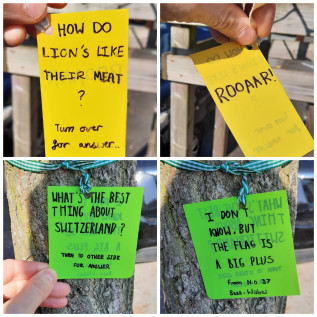 And as lockdown became real so did peoples creativity, looking out for each other and becoming more neighbourly.

The first acts of imagination began with children from one household making rainbows for people to put up in their windows and leaving them outside for collection.

This was shortly followed by Tree Jokes, carefully laminated card hung from trees in the street with jokes on, question on one side punch line on the other.

Throughout lockdown the theme of the group took on a life of its own ranging from helping with shopping, combining delivery slots when people struggled to find one, intelligence on suppliers with flour (the new gold), wildlife updates and live cam of a blackbirds nest residing in one neighbour’s garden.

The discovery of neighbour’s gifts, who hadn’t previously connected, grew each day. One resident heard his neighbour each day play the piano, the gentle energy of the WhatsApp group gave the young man confidence to suggest a (physically distanced) street concert. Ideas evolved and one sunny Sunday afternoon few weeks later a street concert was had. Queen on keyboard, Bowie, Beetles and Lennon by piano via front window and the turn up of beautiful sax played ‘My Favourite Things’ along the street.

Alongside events and happenings, it’s hard to go a day where someone isn’t lending a ladder, offering a no longer used bike or coming to the rescue mid cake bake when someone realises they’ve run out of sugar!

These simple actions show how easy it is to support and connect with others at a distance.  Transient isolation, where feelings of loneliness come and go, is something many of us have felt during covid.  A simple connection and making someone smile goes a long way, even from 2 meters!